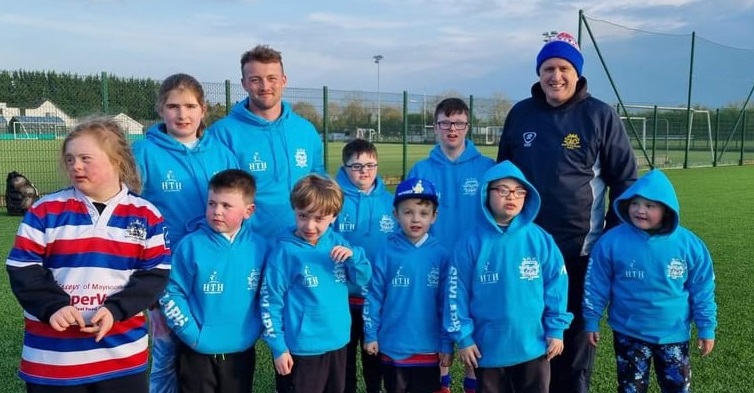 Last June, North Kildare RFC started their newest team, the Skylarks tag rugby team for children with additional needs aged between 4-17 years.  This new initiative, started in conjunction with the IRFU, Leinster Branch and Kildare Sports Partnership, was part of the ongoing rollout of 24 inclusive teams in Leinster.

Will Connors, star of the Leinster and Ireland teams, is the ambassador to the team.  Will was formerly a North Kildare player.

Sinead Griffin, Junior Chair North Kildare RFC said last year, “It is lovely for the children throughout the club to see a local North Kildare player move up through the ranks and play for Ireland. He is always very supportive of both North Kildare RFC and the Skylarks. On a personal note, I think this is an amazing venture in the club, as I see that sport is open to all.”

On the May bank holiday weekend, Kieran Horgan, who assists as a coach with the young team, presented all the players with their new team hoodies.  Everyone was delighted and it added to the celebrations for the Skylarks who went on to win the Fiachra Treacy Memorial Trophy  in the junior section at the Terenure blitz.

This template supports the sidebar's widgets. Add one or use Full Width layout.

This website uses cookies to improve your experience while you navigate through the website. Out of these, the cookies that are categorized as necessary are stored on your browser as they are essential for the working of basic functionalities of the website. We also use third-party cookies that help us analyze and understand how you use this website. These cookies will be stored in your browser only with your consent. You also have the option to opt-out of these cookies. But opting out of some of these cookies may affect your browsing experience.
Necessary Always Enabled

Any cookies that may not be particularly necessary for the website to function and is used specifically to collect user personal data via analytics, ads, other embedded contents are termed as non-necessary cookies. It is mandatory to procure user consent prior to running these cookies on your website.